Learning! Are Microwaves Actually Killing Us? 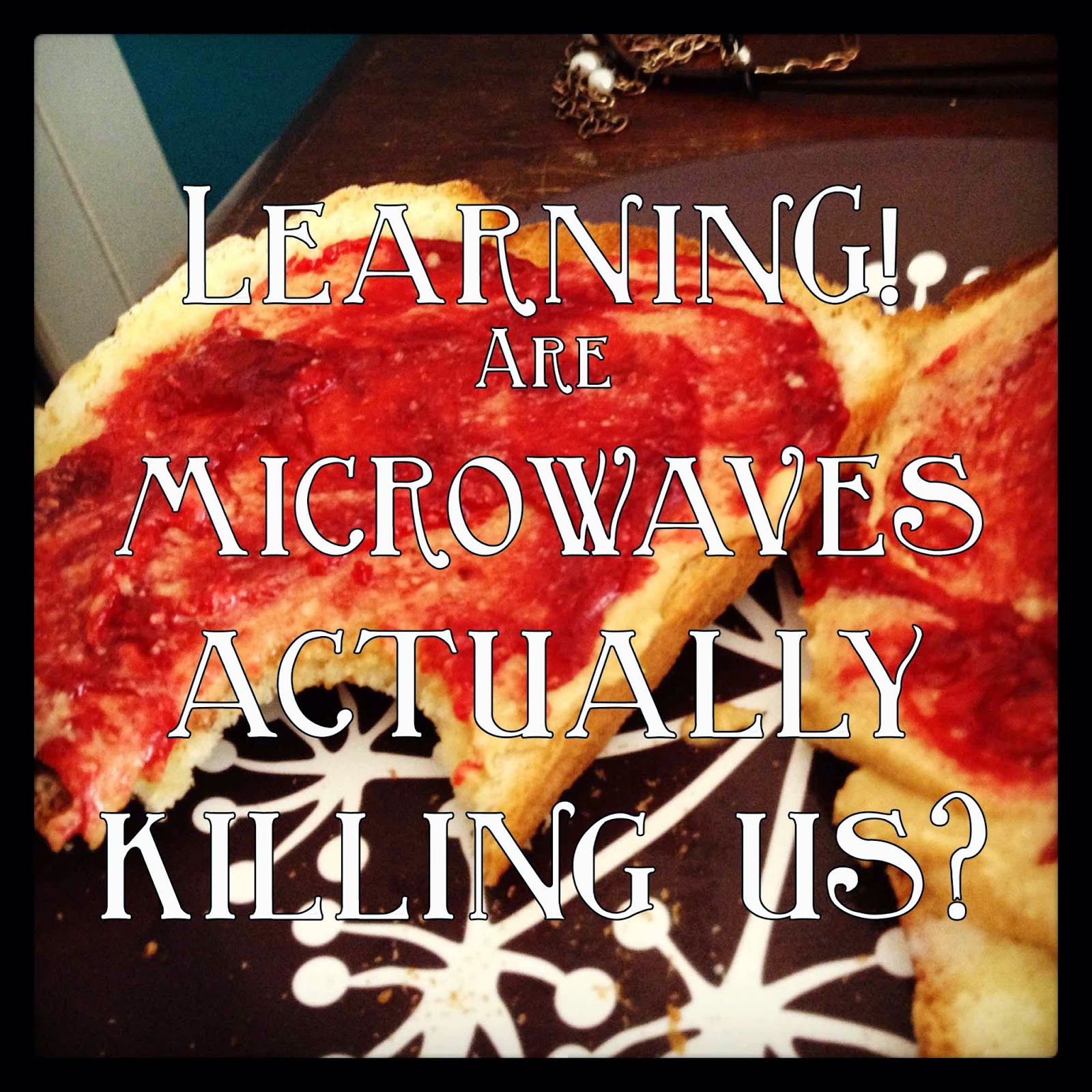 I am one of those annoying people who doesn't have a microwave.  It's half tiny kitchen-syndrome, and half believing-the-hype-about-subtle-poisons.  I figure that until I have the time to look up all the research, or maybe run a properly-controlled experiment myself, I should just abstain.  Besides, food usually tastes better when it's not microwaved, and I don't miss it.  However, I've always meant to look into it.

First of all, this is in no way definitive research.  This is google, for pete's sake, so let's take it with a grain of salt.  Here is what I have uncovered from both sides of the debate:

Early on people realized that when foods are heated in a microwave, they become what we call "superheated", where the container doesn't seem too hot, but the food is scalding.  It can also suddenly explode when disturbed after microwaving.  This is because the microwave heats liquids so quickly, they don't turn to steam and the steam gets trapped inside the liquid instead.  Because of this, you are never, ever supposed to microwave milk or formula for a baby in the bottle, because you won't necessarily be able to tell how hot it is.  Don't burn your baby!

The burning issue has been replicated, and has reached the level of something that is "just known" to most people.

Apparently in 1991 a woman was given a blood transfusion that had been warmed in the microwave and then died.  The only possible explanation, of course, is that the microwave altered the blood in some way and it killed her.  Not that she was already sick or there was already something going on with that blood.  The article describing this event also says that blood transfusions are microwaved all the time, and we don't hear about people dying from them all the time, so this isolated incident might not be great evidence.

There has been one experiment, that is cited on all claims of the dangers of microwaves, by a man named Hans Hertel where he and 7 other participants (red flag alert: scientists are never participants in their own experiments) holed themselves away in a hotel for 8 weeks eating a rotating diet of raw vegetables, conventionally cooked vegetables, and microwaved vegetables.  Same with milk.  Blood samples were taken before eating and then at regular intervals after eating.  The claim is that after consuming microwaved foods the men saw an increase of "bad" cholesterol, as well as a decrease in white blood cells and cells that demonstrated the initial stages of cancerous developments.

Unfortunately, the study was never published in a peer-reviewed journal, the sample size was eight, the researcher participated, the raw data was never shared, no one ever got sick, and the study has never been replicated.

Another infamous study is the child's science experiment watering plants, where microwaved water kills the plant.  Here is an article responding to this experiment, including a proper, blind study attempting (and failing) to replicate the results.

There's no real evidence I've found of this, but people argue that microwaving reduces the vitamins in foods.  The first consideration here is that some vitamins break down in any heat, like Vitamin C, so microwaving is not the exception.  Replicated studies, however, show that microwaves do not do any more damage than conventional cooking.

When applied in intense doses, what microwaves do is cause polarized molecules to rotate, and the friction creates heat, which warms your food.

If you are like me and didn't take more than the minimum requirements for sciences, that might sound a bit scary.  Further reading, however, has informed me that it might actually be safer than other forms of heating food.

You see, the argument that microwaves change the molecular make up of food doesn't really hold, because all cooking has the potential to do this.  For example, when frying meats, the high temperature can cause hydrocyclic amines (HCAs) to form, which have been shown to cause cancer in lab animals.

I can only conclude from my brief googling that I have been silly.

It seems that there are two potential dangers to microwaved foods: one, that they will be too hot and burn me.  The second is that they might contain elements of a plastic container, if they were microwaved in one.  This isn't so much because microwaves are terrible, but because plastic breaks down really easily and can leech into food.  You wouldn't cook with plastic in the oven, don't do it in a microwave.  Especially those flimsy little Ziplock containers.
at December 26, 2014
Email ThisBlogThis!Share to TwitterShare to FacebookShare to Pinterest
Labels: *Learn! Fridays, Growth & Advice, healthiness, Help Yourself