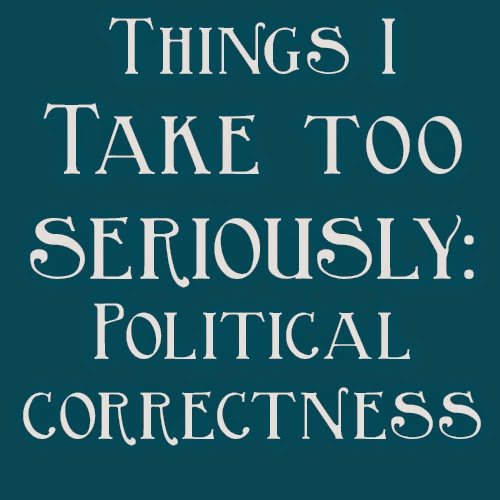 There are some things I take a bit too seriously.  Of course, if you ask me, I'm actually taking it all just the right amount of seriously.  Unfortunately, a lot of other people don't see life the exact same way I do, so I sometimes suddenly realize that I'm on a horse and it's pretty high and everyone else is rolling their eyes as I have gotten halfway through a rant.

The issue that gets me generally boils down to other people wanting there to be less political correctness in the world, and me thinking that it's necessary.

I mean things like not getting defensive if someone else celebrates a different holiday, holding back the sexist/racist jokes, trying to refrain from making heteronormative statements, and saying things like "he or she" when the gender isn't specific, or "parent or guardian" instead of just "parent" so that kids who don't have parents feel included.

Basically, I mean being considerate of other human beings and the ways we can unintentionally hurt them or hold them back.

Of course, it can sometimes be annoying to try to keep up with the PC rules.  They seem to change all the time and things that we all thought were perfectly fine are suddenly taboo.  Yes, it sucks to suddenly realizing that a joke or comment I enjoyed making is actually hurting someone, but it should suck more to realize that I've been unintentionally hurting someone than to have to find a new joke or catch phrase.  It's only annoying because we are not the ones being hurt and because we are not used to being restricted.  In other words, because we are privileged.

The truth is that 98% of people I have heard complain about political correctness are white.  All are able-bodies.  Most are male, straight, and middle class.  In other words, people at the front of the privilege wagon.  Honestly, all I hear when I hear someone complain about political correctness is whiny privilege.  I hear Michael Scott, crying out in despair when he is told in the Sexual Harassment Day episode of The Office that he "can't say ANYTHING?!?"


Now, I'm not saying that an able-bodied, straight, white man doesn't know what it feels like to be picked on or oppressed (or that people who fall outside that category aren't sometimes annoyed with political correctness).  We all have our wounds and we all have our stories.  But if you grew up in a place where you are the majority culture, where the dominant stories told everywhere around you are your own and you had the means and support to pursue a life you wanted, where, in a large, societal sense, you are not the "other", then I'm afraid you don't get it.

Here's where people point out places they've worked where they were a minority or the fact that they travelled or have multi-ethnic friends who agree with them or live in a neighbourhood where it's "all Asian" or whatever. There is a big difference between temporarily experiencing alienation in one given context and living your entire life as an outsider to the dominant culture you live in.  Being a member of the dominant culture of Canada myself, I know that when I have felt oppressed or held back or like a minority, I still live with the comfort and knowledge that this is not my ongoing experience of life.  My privilege lies in the fact that I have a huge societal cushion supporting me in a larger sense, regardless of what my temporary experience is.

If you think that political correctness goes "too far", then I challenge you to look at it a little deeper.  What are you really losing here?  Are your rights being infringed upon?  Really?  Or are you actually just annoyed at having some power or privilege or blissful ignorance that you're accustom to being taken away?  Is your anger actually because you aren't used to experiencing restrictions that other people experience on a daily basis?  Like when a baby gets half their candy taken away because they had all the candy and there are other babies who should have candy too, for pete's sake.

It's important to realize what we haven't experienced, or what other people are not able to experience, because we were given all the candy when we were born.  When we realize that there is something we can do to give some candy back, we should do it and just shut up about it.

Honestly, I think it's okay to feel annoyed about political correctness as a privileged person.  Anyone will tell you that having something taken away that they are used to having is annoying and that's a legitimate reaction.  What is not okay is to polish that annoyance into righteous indignation or to fight to cling to every little bonus life has given us.

I hear a lot of people say that everyone's equal now so we should just all get over it.  (Again, the "a lot of people" I hear say thee things are white, middle class, able-bodied people.) That's easy to say if you live in a place like Canada where there are laws on the books that declare everyone equal and everyone claims to be free of racism, sexism, ageism, and other -isms that hurt people, AND if you are a person who isn't on the other side of any of those -isms.  Because there is this nasty little thing called the implicit bias.


Definition: implicit bias occurs when someone consciously rejects a discrimination, stereotypes, or other racist/sexist/ageist/etc-ist behaviour, but holds unconscious negative associations with other groups.

We all have implicit bias, and we don't realize it - that is, after all, how it works, it's unconscious.  Pair that with the fact that we live in a world where social structures were put into place while groups of people were being actively and legally oppressed, and we need to take some intentional steps to see where we're hurting and holding people back in the world without realizing it.  This is where political correctness steps in.

I read a great article recently called "Oops! Your Implicit Bias is Showing."  It discusses a study where the same research memo was evaluated by law firm partners, some told that the writer was white, some that he was black.  The piece had many different errors intentionally sprinkled throughout.  The summary is that when people thought the writer was white, he had potential and just needed to fix a few things up.  When they thought he was black, he was "average at best" and seemed uneducated.  They even found more spelling errors with the black writer than the white writer.

I will bet you that none of the partners evaluating this document thought of themselves as racist.  Because they aren't - at least not intentionally.  They do, however, have an implicit bias.  One you and I both have as well, I'd bet.

There is a lot more research and evidence on this topic, showing how many unconscious biases we hold.  In fact, there is an "Implicit Associations Test" that you can take right now that will reveal your implicit biases.  Most people fail.

The point isn't to just sing a few bars of "Everyone's a Little Bit Racist" from Avenue Q and get over it.  While it is good to recognize that we've all got some racism in us, it is also important to take active steps to get rid of it - which is the cue for political correctness to enter the scene.  By watching what ideas we are really supporting in the little things we say and do, in the labels we give people and the jokes we make, we can actually make a difference.  Instead of being annoying, could this not be empowering?

At the end of the day, yes, you get to say whatever you want.  In Canada, you will be stopped from spreading hate or fear and that's about it.  Go ahead and make a comment implying that everyone is straight (heteronormativity), complain about bad Asian drivers (racism), talk about what you want to "do to" that girl with the hot ass (sexism/rape culture), say whatever you want.  You are allowed, because there are no laws against being a jackass.  But if I'm around, you can bet I'm going to call you out on it.
at May 08, 2014
Email ThisBlogThis!Share to TwitterShare to FacebookShare to Pinterest
Labels: happy feminism, Issues & Ideas, this really gets my goat, What's Right is Right