I came across the term "Hobson's Choice" the other day while doing some research for a play I'm currently working on.  Not knowing what it was, I naturally turned to Google, which pointed me at Wikipedia.  Here are some handy definitions for you next time you want to sound like a smarty pants at a party: 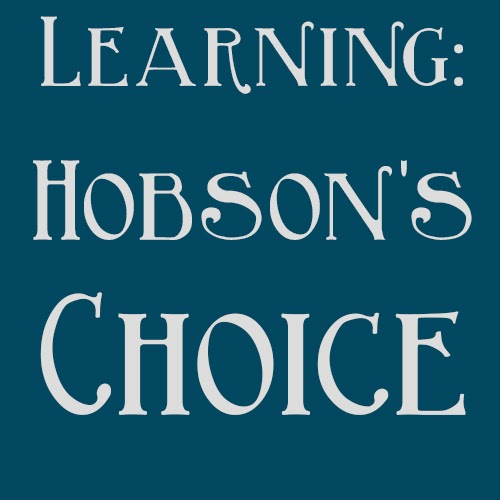 Hobson's Choice: A free choice in which only one option is offered.  The choice is between doing something (accepting the one option) and nothing.

Hobson was a dude who lived in the 16th century who had a big ol' stable full of horses that he would rent out.  He would, however, only let people rent out the horse who was in the stall closest to the door, so while they may have expected to have a lot of horses to choose from, there was only one, and they would take it or leave it.  He did this to prevent his best horses from being taken out constantly and being overused.

The term has made it into popular culture - sort of.  There is a play called Hobson's Choice as well as a few movies.  The one that I have vague remembrances of, however, was a TV show called The Early Edition that ran in the 90's where a man named Gary Hobson (wink, nudge) would receive tomorrow's newspaper the day before it was published, and then have to decide if he was going to act on it and try to change the future or not.

Misuses/Terms that are confused with Hobson's Choice but are different:

Dilemma: A choice between two or more options that are probably undesirable.
Morton's Fork (or double bind): Different choices will yield the same result, and that result is probably undesirable.
at February 28, 2014
Email ThisBlogThis!Share to TwitterShare to FacebookShare to Pinterest
Labels: *Learn! Fridays, Growth & Advice